On National Cancer Survivors Day, Sunday June 5th, 2022, a life-sized statue was revealed by the West Cork community of Caheragh to honour the late Professor Gerry O’Sullivan, a pioneer in the field of cancer research, and founder of our national charity Breakthrough Cancer Research. 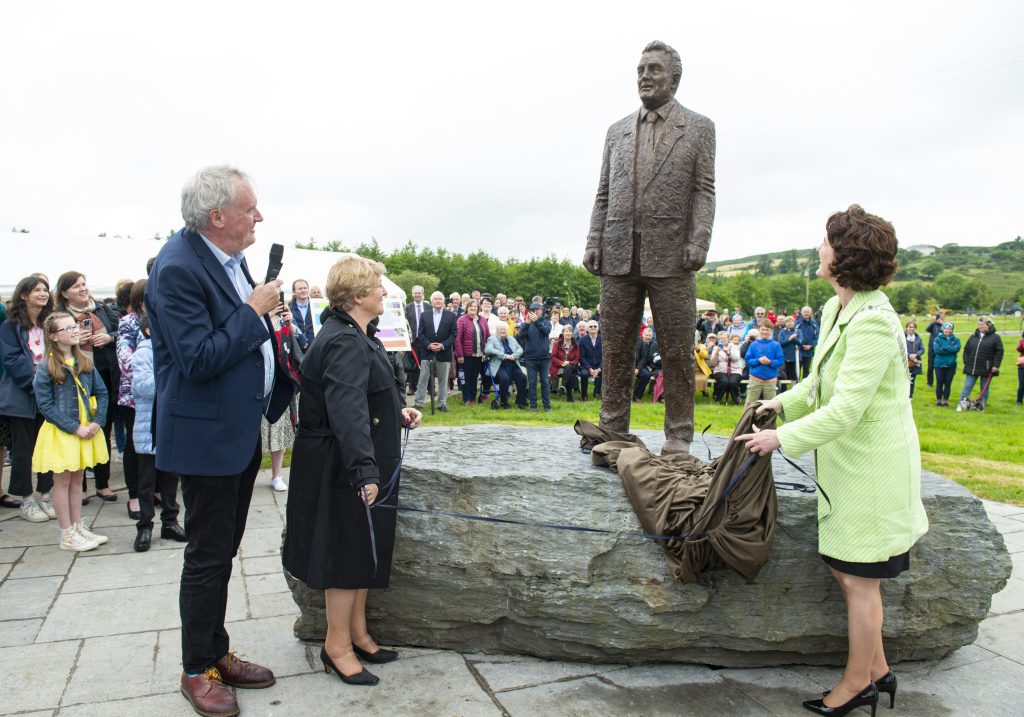 The statue was officially unveiled in the Professor Gerry O’Sullivan Memorial Park, Caheragh, by the Mayor of the County of Cork, Cllr. Gillian Coughlan and Professor of Sullivan’s widow Breda.  They were joined by friends, family and colleagues from all over country and as far as the US, along with neighbours and the wider West Cork community, as they celebrated an extraordinary life dedicated to helping others. 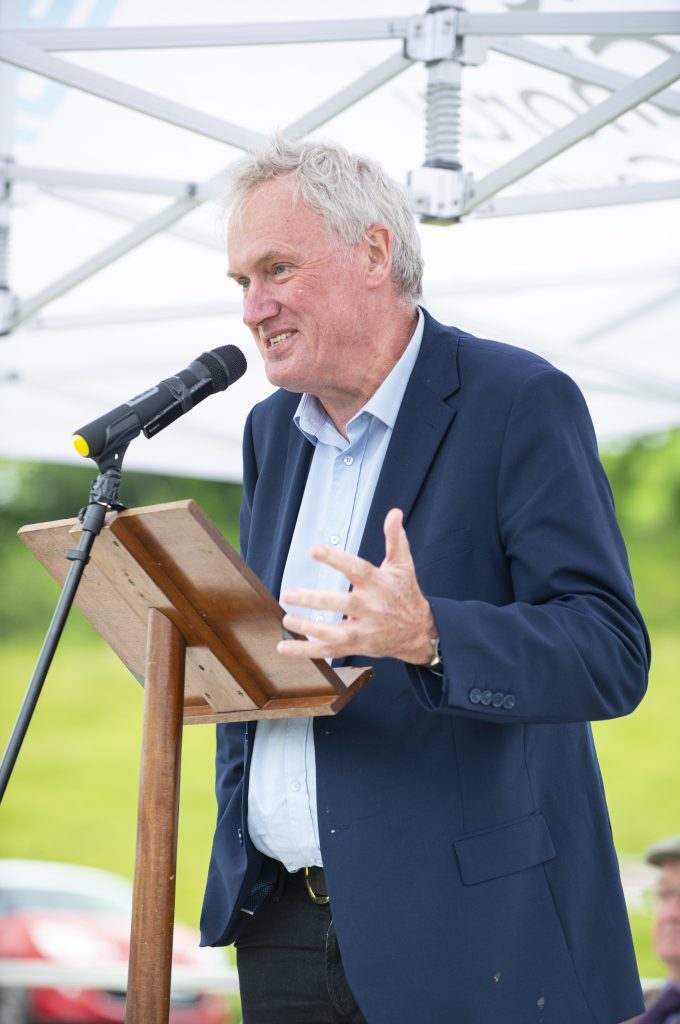 The keynote speaker was one of the world’s most influential scientists, leading immunologist, author and broadcast personality, Professor Luke O’Neill.  O’Neill is a regular contributor to discussions on science and research on TV and radio in Ireland and around the world. Like many said of Prof. O’Sullivan, he has an infectious enthusiasm and belief in the power of science to help us live better lives.

Professor O’Sullivan was a highly acclaimed surgeon, scientist and cancer researcher. His world-renowned clinical expertise was matched by his belief in the power of research to mould a better future for people with cancer.

Gerry was deeply rooted in the West Cork community.  He grew up on a farm in Milleenahorna, Caheragh, Co. Cork, went to Gurrane National School, and then to St. Fachtna’s De La Salle High School in Skibbereen.  He spent as much of his free time as possible ‘down West’ and religiously attended the Threshing Festival in the community every year until he passed in 2012.

In 2014, the local Caheragh community, who are immensely proud of Gerry and his accomplishments, created a ‘Science Through Nature’ themed recreational park, which was named in his honour to preserve his memory and inspire future generations.

The Kirby Family in Killeenleigh donated the 4-acre plot, which links the school and churches to the rest of the village, and the development was funded by generous private donations, Cork County Council and other voluntary groups. It is an ongoing project to create a vibrant, creative and educational space for families in the area, with plans for themed gardens denoting significant periods of Prof. Gerry’s life.  There will also be a pollinator corner for a hive and honeybees, another passion of O’Sullivan.

Eight years later, the same community came together again to commission a life size statue of the late professor. The statue was created by sculptor Don Cronin. 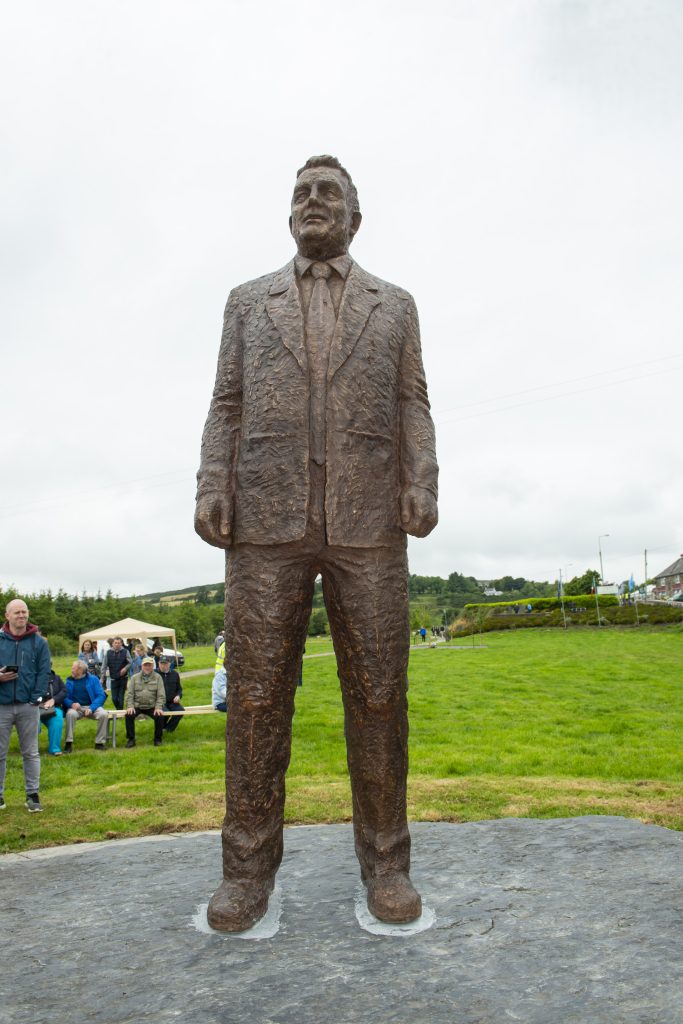 Chair of the committee Mícheál Kirby, said, ‘Professor O’Sullivan died at the young age of 65 from cancer, a disease he had spent his whole career saving others from.  We are so incredibly proud of his achievements and the man he became and want to encourage young people in our community to follow in his footsteps. Nothing is impossible when you have passion, determination and a kind heart.  Gerry never forgot his roots in West Cork and we will always remember him.’ 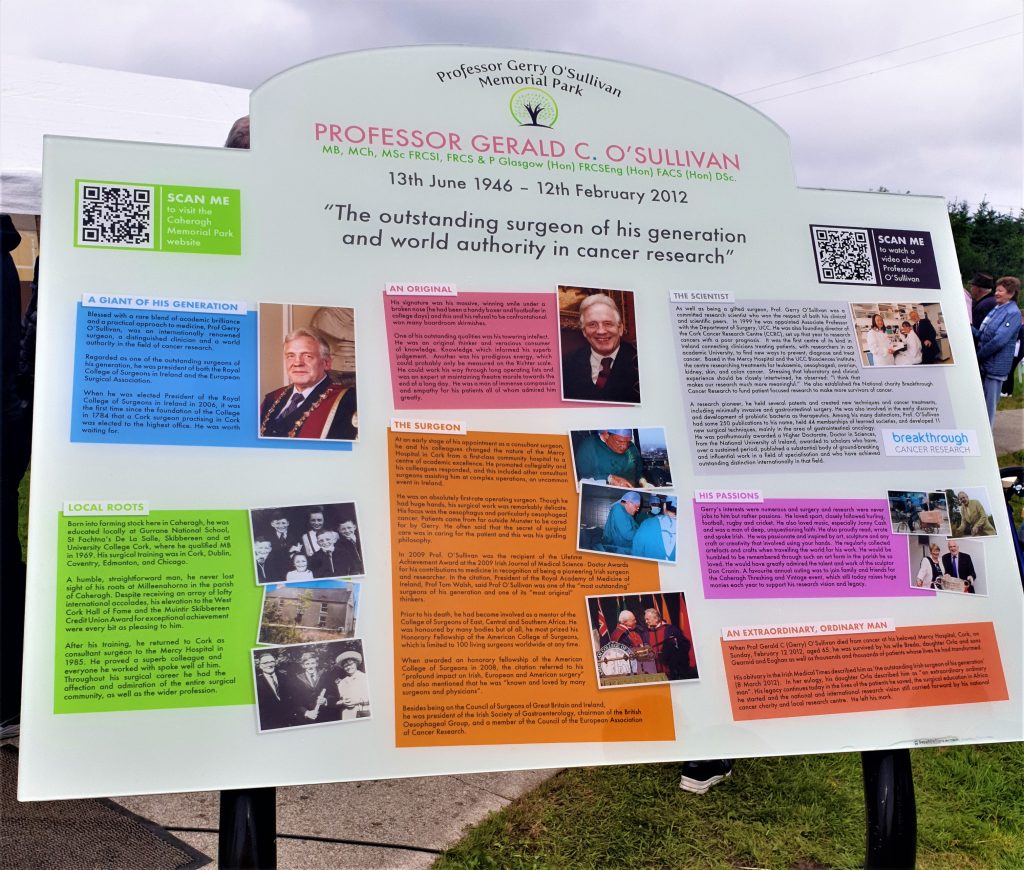 Orla Dolan, daughter of Professor O’Sullivan, who is continuing his vision as CEO of Breakthrough Cancer Research, said, ‘My father always had a special place in his heart for West Cork and the people of Caheragh.  Whenever we saw him lost in thought, he said he was ‘looking West for inspiration’. I know he would have felt immensely honoured and humbled by this event and we were delighted to have so many people join us from far and wide on the day as we celebrated his life and the lives of cancer survivors.’

Professor O’Sullivan’s work continues with Breakthrough Cancer Research, which he founded on the unshakeable belief in Cork and in Ireland that we can make more survivors of cancer and we will do that through research. Breakthrough invest in world-class research in Ireland to impact the quality of life for cancer patients and to save lives. We are particularly focused on improving outcomes for cancers which are poorly served by current treatment options and have helped take 9 new treatments from the lab into clinical trial.

In addition to the commemoration ceremony, there were performances from the local national school, music with the St Fachtna’s Silver Band, facepainting and food trucks. 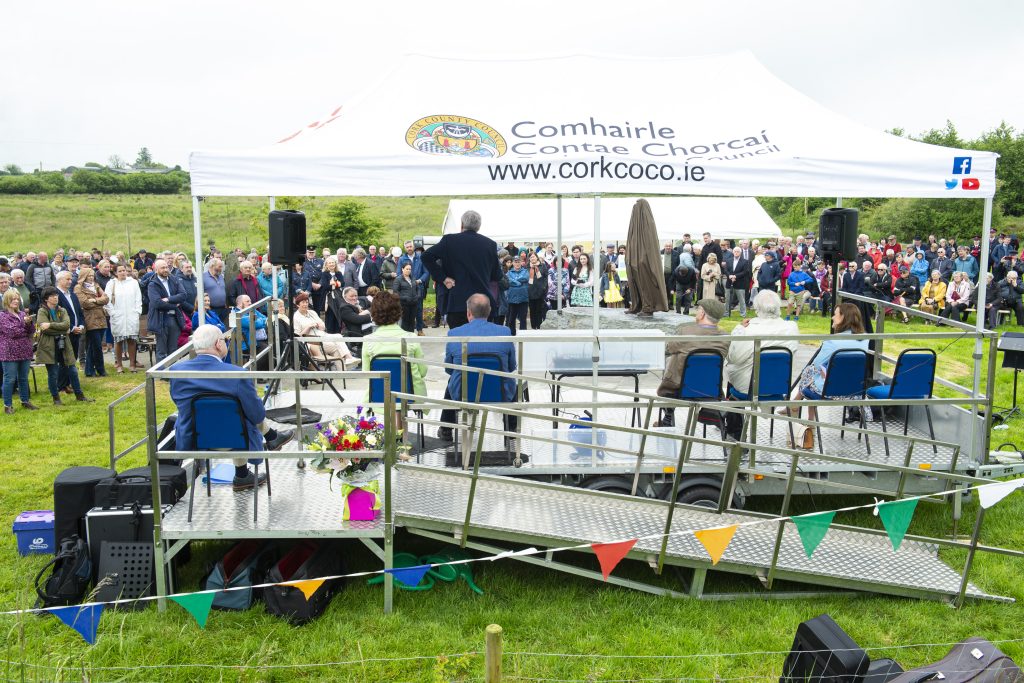 An image gallery from the day can be viewed here 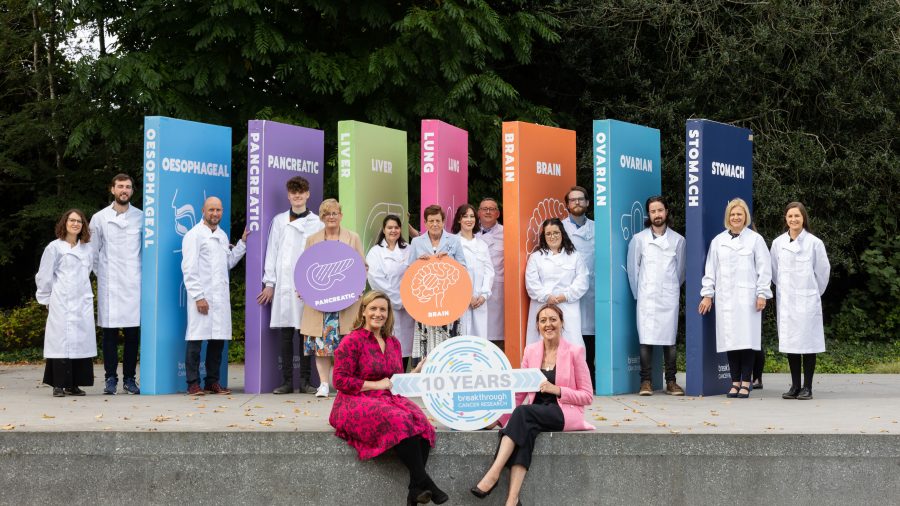 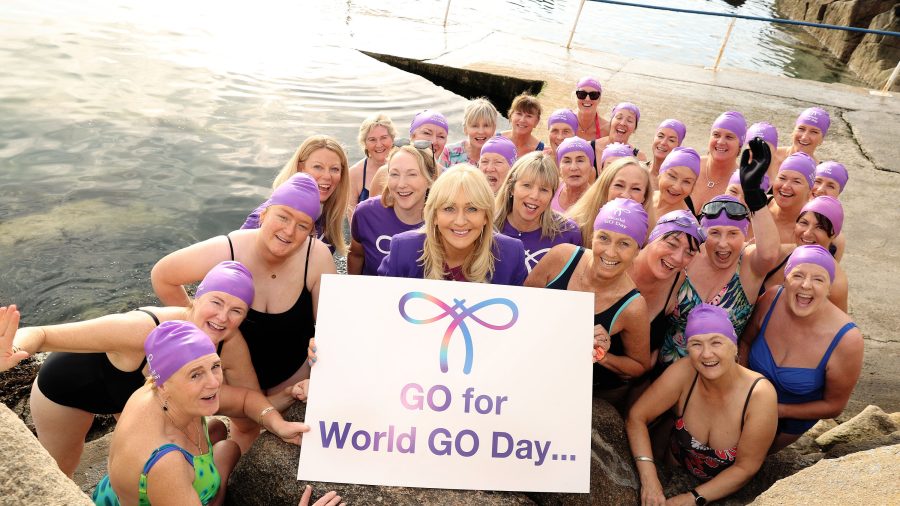 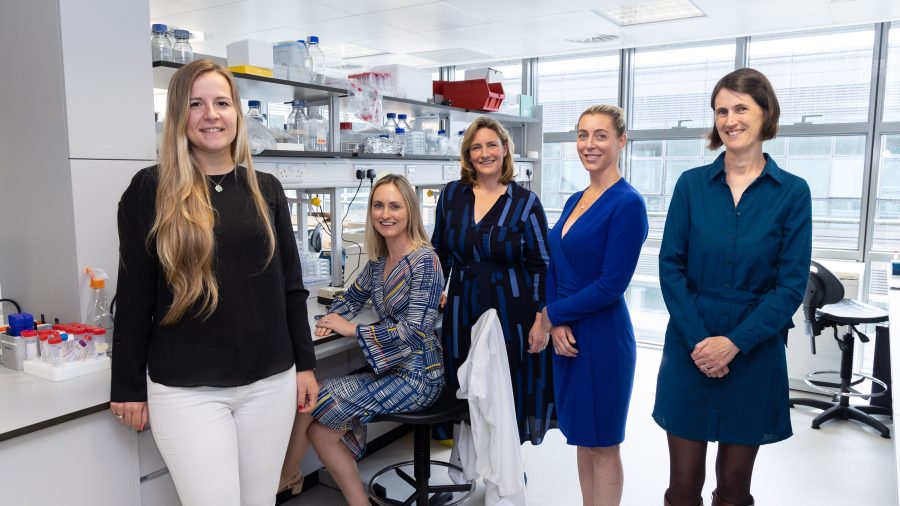