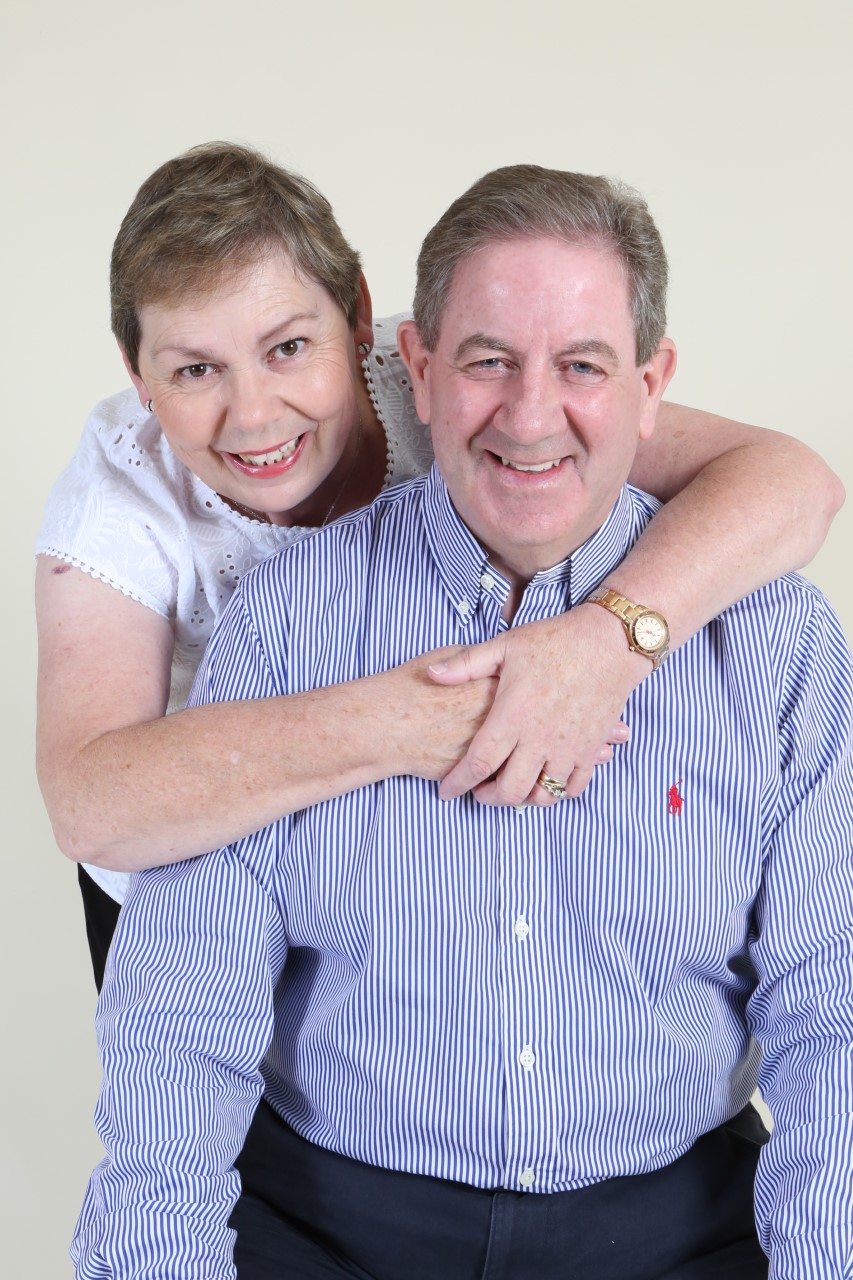 In 1974 I met Mary, and I suppose it was love at first sight, and we got married in 1976 at the tender age of 22. We have 2 children, a boy, and a girl, both grown up now. Mary worked as a teacher and I was a salesman for a food company.

In 2007 Mary was diagnosed with Breast Cancer and took a year out for treatment which was successful. So, in 2008, when we were both 55, we both decided to take early retirement and travel as much as we could. We were home alone now, so it was easy just to take off when it suited us.

We went on a variety of trips including cruises, city breaks, sun holidays and sometimes we stayed with family or friends abroad. In January 2016 we were in Australia staying with friends and I just did not feel right. I thought it was the change of diet or maybe too much alcohol, but I was waking up most nights to go to the bathroom. Sometimes there was blood in my stool, and it was happening very frequently now.

We came home in February and after eating & drinking what I thought was excessive amounts I weighed myself to discover that I had lost weight. I gave it a few more weeks, but the bleeding did not stop, and I continued to lose weight, so I went to my GP. He told me not to worry and he arranged a colonoscopy for me. The possibility of hemorrhoids could be a possible diagnosis.

The big day arrived, April 13th, 2016, and I had my colonoscopy. Mary dropped me off at the hospital early in the morning and she was to collect me in the afternoon. I had the colonoscopy and as I was waking up, I noticed Mary sitting by the bed. She said that the hospital rang her to come over. It was only 11.30 am. I had that funny feeling you get when you know that this is not good.

The doctor came and he told me the results and without saying it directly he told me that I had bowel cancer. He used the words “a nasty growth” to describe cancer. I have noticed over the last 4 years that the medical profession rarely uses the word “cancer”. They call it a tumor, a nasty growth, or sometimes just “it”. Maybe it’s to make people feel at ease.

I could not believe what I had just been told. Me, Mr Invincible, a survivor of 2 car crashes, a sporty person all my life, a very fit person now had cancer. I had to accept the diagnosis and now I faced a monumental battle.

And so it began… the endless appointments and tests. Mary always went with me for appointments as she was the second pair of ears listening to what was being said to me. It was a great idea and I would recommend it to anybody who finds themselves in the same situation as me. Why? There is such information given, you just are not tuned in and you will try to come to terms with your diagnosis.

I met the surgeon who was going to remove cancer in early May but first he wanted to see the tumour for himself. I had another colonoscopy. The surgeon was not happy with the awkward location of the tumour and wanted to shrink it first before surgery. By now I had an oncologist and in mid-June I started a six-week course of chemotherapy pills and radiation therapy, both to be taken together on the same day.

I never thought that this would be me. Sitting in the Radiation Unit looking around at the other cancer patients, all ages, all different types of cancer, all hoping for a cure. The first and second week of treatment was comfortable but then the burning effect of radiation kicked in and by now every time I wanted to use the toilet it felt like somebody had cut me with a razor blade. It got worse to the point of almost unbearable and by the end of week six I was on cortisone pills to ease the pain. But at least now that treatment was over, but I was exhausted. It was fatigue that I never had experienced before in my life, but I would recover, and I would get my energy back.

Mary and I had a cruise booked for our 40th wedding anniversary in July but we had to cancel the trip due to treatment. We did go to Killarney for a few days but all I was fit for was sleep after 6 weeks of treatment.

The next part of the plan was a waiting game to see if the treatment had shrunk the tumour. In October 2016 I had scans and another colonoscopy. I had a date set for surgery in November, and two weeks prior to surgery we met the surgeon who had the results of the tests.

It was just as well that Mary was with me again because the surgeon informed us that yes, the tumour had shrunk but it had shrunk so much that it was gone, and all that was left was a scar. I could not believe what I was hearing.

Seemingly the tumour can disappear in one out of four patients after this type of treatment. I was very receptive to Radiation Therapy. I was given the option of going ahead with the surgery anyway to remove the cancerous area or cancel the surgery. The two options didn’t matter to me now, the cancer was gone, and I was overjoyed.

Surgery was cancelled but I would have to continue to go in for check-ups. At first, it was every 3 months and now, after 4 years, it is annually. I could live with that arrangement.

A few weeks later Mary was complaining about a pain in her hip. In December she decided to go for an x-ray. On December 23rd she received a phone call from her oncologist to go and see her immediately. Her cancer was back. Shattering news like that doesn’t make for a great Christmas !!!

As if our world wasn’t turned upside as it was, it was now gone crazy. Mary had Metastatic Breast Cancer. So here we were heading into 2017 dealing head-on with cancer again and the fresh challenge which it brought us. It was not easy as we both had countless appointments and tests. There was one day when Mary had three appointments in one day in two different hospitals. But we kept them all. Between December and the end of April, Mary had three surgeries. Meanwhile, I was going for my scans and colonoscopies.

Sadly, on May 3rd, 2017 Mary died from Metastatic Breast Cancer.

We had many conversations in her final days and her only worry was for me and that I should at least carry on. I have tried my best to fulfill her wishes. My lifestyle has changed. My diet has changed and now, as I write this, our world has changed forever with the advent of Covid-19. This represents yet another challenge as I must stay healthy, I must stay at home and in the middle of this pandemic, I had to have a check-up. I am waiting for the results.

I miss seeing our three grandchildren and I no longer have Mary by my side to encourage me to stay safe. For anyone who had cancer or is dealing with cancer, it is not easy now as our hospitals are preoccupied with Covid-19.

Also, during this health emergency, it has largely gone unnoticed that April is Bowel Cancer Awareness month. Both men and women are equally at risk for Bowel Cancer. The cancer is most common among people aged 50 and older but it can occur in younger people. Regular screening, especially if you are over 50, is vital to detect this horrible cancer at an early stage when it is easier to treat. If only I could go back in time, I would have had a bowel cancer screening in my fifties or even earlier. I realize I belong to a club that nobody ever wants to join—the cancer club. But once you are in, you are in. So, the more people I can help, the better.

I have heard it said that “cancer changes your life,” and now I know it really does. I feel like every day is a blessing, and I truly live life to its fullest. I squeeze more time into each day. I have stopped to pay more attention to the small things in life that we often overlook daily, like breathing fresh air, enjoying the sun, and playing with my three grandchildren. Every day is a special gift from God, and I appreciate the blessings much more.

My cancer story is not over. I am good for now, until my next scope or scan. Each scan carries a lot of anxiety. But life is good. Really good. I have everything now that I want in life and in an ironic twist of fate, getting cancer helped me see it.

Every year 1000 people die from the disease in Ireland. It is important to make ourselves aware of the signs and symptoms to look out for, and if concerned, talk to your GP.