Lily and her mum Jessica share her childhood Leukaemia Story 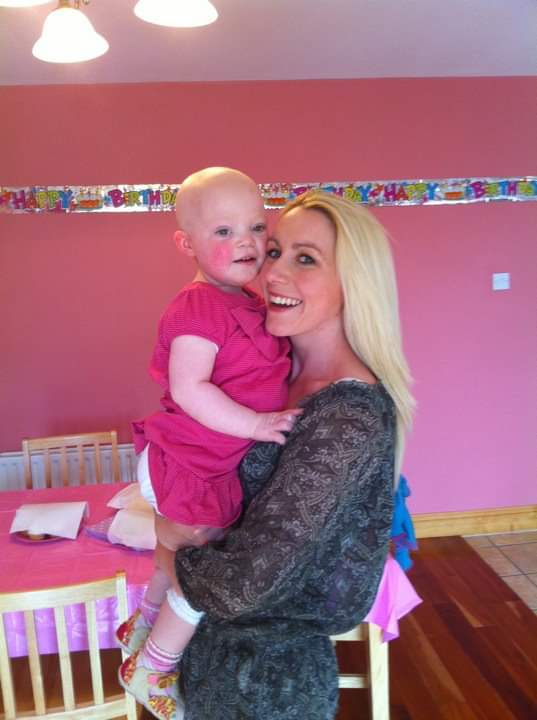 ‘I was at the hospital as much as I was at home so it felt like I lived there too. To me everything was normal because of how small I was. I thought every child had to go through what I went through.’ Lily.

Lily was born on the 6th September 2009…8 weeks before her due date! I was lucky to get to the hospital as she rushed into the world scaring us all. When I was told she would be born any minute I asked if my baby would be okay. They couldn’t answer.

Thankfully Lily was a fighter and after 3 weeks in the neonatal unit Lily was allowed home. She needed to go for check up’s until February 2011 to make sure she continued to reach all her milestones at the right times, which she did. I walked out of the hospital with Lily that day in February and said I never want to see another hospital again.

It was just a normal weekend in May 2011 that would turn our world upside down.

Lily was a one and a half year old happy, crazy and super energetic little girl but this particular weekend, Lily was a little under the weather. It seemed to be nothing more than a cold and she just rested on the sofa.

The following Monday, I had a totally unrelated appointment with my GP, so I brought Lily along. The doctor checked and she had a high temperature, he said Calpol should do the trick and let us go. We were on our way out the door of the surgery and he called us back and wanted to check her temperature again. On doing so he changed his mind and said as it was so high and she was so small, she may need fluids but if we go straight to the hospital now, we should be home in time for dinner.

At the hospital, they took routine bloods and by 4pm that same day, they called us in a room and broke the devastating news…

I remember everything about that day, like it was yesterday.

Every word that was said stung.

All I wanted to know was would my little girl be okay, but nobody could answer that question.

They told us that there was a 90% success rate in the current treatment. This was of no comfort to me. The odds of her having leukaemia in the first place were tiny, why would she not be in this other 10% now. The only comfort would have been telling me there was a 100% success rate.

We left the room and were put straight into an isolation room.

The next day we went straight to Crumlin, Lily received a platelet transfusion. The following day Lily needed an operation to fit a hickman line and the day after that Lily was to receive her first chemotherapy.

Lily is my real-life super hero!

I watched my little baby girl’s body go through so much pain, tiredness, weakness and sickness but somehow from beginning to end, Lily smiled the whole way through it all. 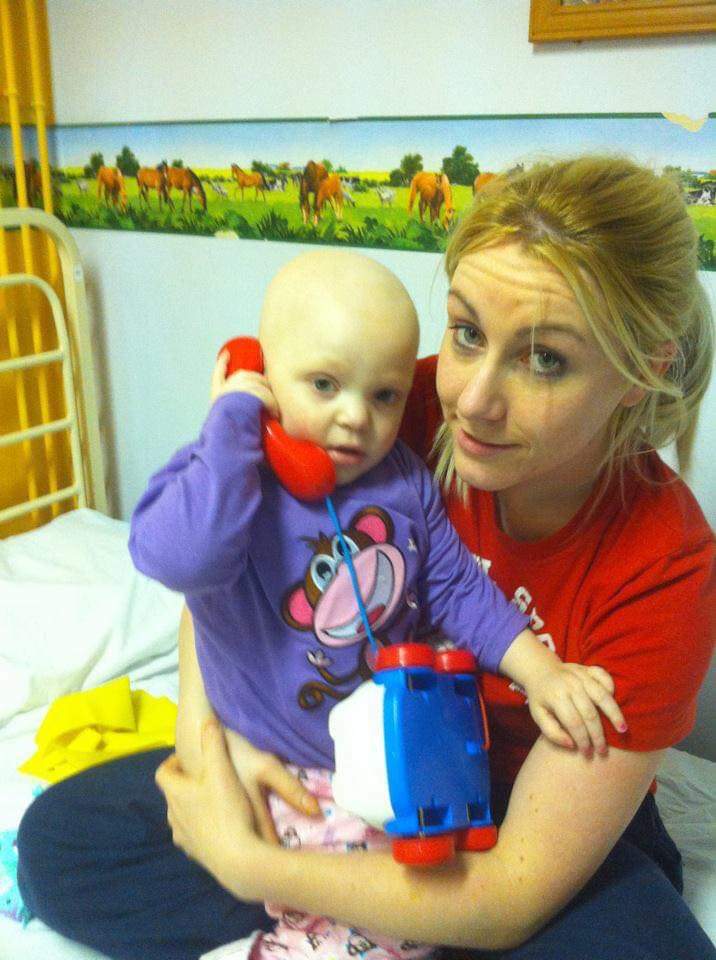 ‘I don’t remember much about my cancer journey because I was so little but I do remember some things like how nice the nurses were, and mammy having to carry me out to the car wrapped in a blanket in the middle of the night to go to Crumlin hospital.’ Lily.

Lily’s beautiful, thick red hair fell out very quickly and at ‘day 28’ her blood results were back. The results showed the original plan of treatment was not working as well as they had hoped. This meant she had now become high risk. Her chemo became a lot heavier but again Lily took it all in her stride and kept on smiling.

Lily would now need daily chemo orally, via her hickman line and/or by injection. She would need steroids, blood transfusions and countless platelet transfusions over the best part of three years. Lily needed weekly blood tests which eventually we were able to do ourselves from home and drop the blood up to the hospital every Sunday evening. Lily’s immune system would be broken down as part of all this treatment and therefore she was liable to pick up any bug going around so was recommended to stay away from school going children as much as possible.

‘I remember I couldn’t go out to play because if anyone was sick I could catch it easily.’ Lily.

Lily and I spent the time in our own little bubble to keep her as safe as possible. This didn’t prevent her catching the odd cold or getting an infection in her line and as soon as her temperature raised, no matter what the hour, we were straight into the car and knew we would be in hospital for a week at least. The first time we were brought around the ward in the Mercy hospital the nurse told me to get comfortable because this would soon turn into our second home and it did.

Lily was treated like royalty by the lovely nurses and doctors. Every visit to the hospital was like a day out. Every overnight was like a hotel stay. Our old life was put on hold but a new life emerged and we just rolled with it. Our calendar was each new treatment plan. Soon Lily’s test results improved and the tough treatment started working. 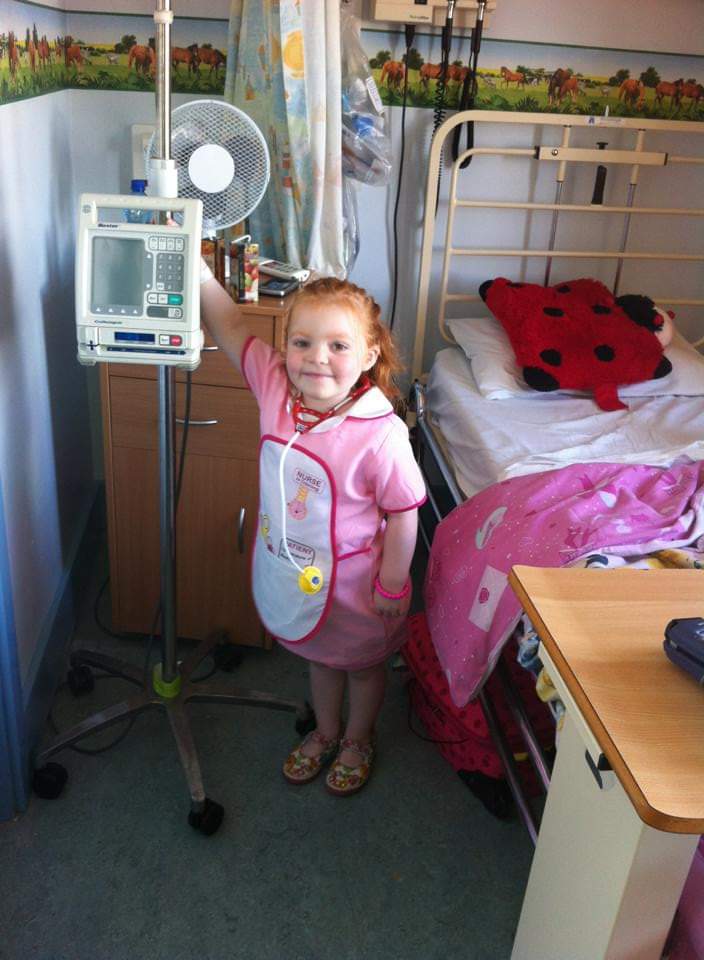 She now lives the life of normal 12 year old girl and continues to amaze me with her never ending achievements each day. Lily’s dreams in life since she has been very small have been to be an artist and a professional goalkeeper.

Lily’s artwork has been on sale in the form of a tote bag for Breakthrough Cancer Research after she was lucky enough to be included in ‘The Shop That Nearly Wasn’t’. She is currently training every day of the week to fulfill her second dream which I have no doubt she will.

Lily’s strength and determination from the day she was born never fails to amaze me.

I am so lucky for all the research that has been done and the breakthroughs that continue to be made.

Without it all I wouldn’t have my beautiful girl here with me today.