There is strong evidence that consumption of red meat and consumption of processed meat are both causes of colorectal cancer. The recommendation is not to completely avoid eating meat. Meat can be a valuable source of nutrients, in particular protein, iron, zinc and vitamin B12.

WHAT IS READ MEAT?

Red meat is any meat that is a dark red colour before being cooked, like beef, pork or lamb. Examples include minced beef, pork chops and roast lamb. There is strong evidence that eating too much red meat can cause bowel cancer, one of the most common cancers in Ireland.

WHAT IS PROCESSED MEAT?

Processed meat is meat that is not sold fresh, but has been preserved by smoking, curing or salting, or by the addition of preservatives. Examples include ham, bacon, rashers, salami, pepperoni, chorizo, corned beef, as well as hot dogs and sausages.

There is strong evidence that eating too much processed meat can cause bowel and stomach cancer, and may cause pancreatic cancer. Processed meat has actually been classified as a Group 1 carcinogen, or a ‘definite’ cause of cancer, putting it into the same category as smoking and alcohol. It is more strongly linked to bowel cancer than red meat is.

Both red and processed meats are different from white meats, like chicken or turkey, and from fish, neither of which appear to increase your risk of cancer.

HOW DO RED AND PROCESSED MEAT CAUSE CANCER?

Evidence from large population studies has shown time and time again that people who eat vegetarian diets are at a lower risk for certain cancers. However, it’s difficult to say how much of this relates to the absence of meat in their diet, and how much relates to other aspects of their lifestyle, like not smoking, drinking less alcohol, and so on.

We do know that when meat is preserved by smoking, curing or salting, or by the addition of preservatives, cancer-causing substances (carcinogens) can be formed. These substances can damage cells in the body, leading to the development of cancer. Cooking meat at high temperatures, by grilling or barbequing for example, can also create chemicals in the meat that may increase the risk of cancer. These chemicals are generally produced in higher levels in red and processed meats compared to other meats. It is also believed that the compound that gives red meat its colour, haem, may damage the lining of the bowel, increasing the risk of bowel cancer over time.

IS RED MEAT NOT GOOD FOR US? 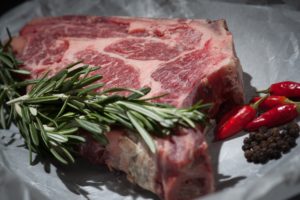 Red meat is actually a very nourishing and healthy food when consumed in modest amounts. It is an excellent source of nutrients like protein, iron, zinc and vitamin B12. It’s certainly not a problem to include small amounts of red meat as part of a healthy, balanced diet. The same cannot be said for processed meats, which have far less nutritional value. If you are a meat-eater, then when choosing meats, it’s best to go for the fresh, unprocessed variety.

HOW MUCH IS TOO MUCH?

While the recommendation is to avoid processed meats completely, there is no suggestion that we should switch to a meat-free diet completely, or to a diet containing no foods of animal origin (a vegan diet). Instead, the recommendation states that we should limit our intake of red meat to less than 500g cooked meat (or 750g raw meat). To put this into context, a medium steak weighs about 145g (cooked weight).

For many of us, red meat may be the centrepiece of our main meal several times per week, and this is probably too much. It’s really just about being sensible, and not eating too much, too often. Overall, the cancer risks from eating red and processed meats are lower than they are for other things linked to cancer, such as smoking.

HOW CAN WE CUT BACK ON RED AND PROCESSED MEATS?

There are lots of ways to cut back on red and processed meats without feeling like you’re missing out.